What is CANVAS STORY?

It’s a place where I feature established artists, musicians, producers and more, and highlight their journey in the creative field they are in. Everyone’s got a special backstory to their pursuit, and no journey is complete; it’s an ongoing journey of setbacks, disappointments; finding courage to hope again, and staying connected with what you love. Everyone’s got a story to share, so read on to get to know this gem.

Some may already be aquainted with KATE’s Youtube, where she first turned heads with her Frozen covers, or perhaps you may recognize her from Korea’s popular music show, Super Star K (season 6). With Ariana Grande-like pipes and an effervescent spirit that is hard to miss whether on or off stage, KATE’s (aka Kate Kim) performances always deliver with excellence and style, and I’m excited for you to get to know her.

1. Who are your musical inspirations and why?

I have many musical inspirations– all from very different musical styles. The bits and pieces of inspiration I get from each of these artists, I believe, make me the artist that I am today! For example, as a baby, I watched, The Sound of Music and Mary Poppins obsessively. Therefore, Julie Andrews was my absolute favorite human being. Even now, listening to her albums from many years ago, I think she has one of the most classic voices ever. I still listen to The Sound of Music soundtrack all the time and she might be the reason I grew up loving musicals! My love for Wicked, Les Miserables, The Phantom of the Opera, Legally Blonde, Jekyll and Hyde, Miss Saigon and all the other musicals that I love are a HUGE part of who I am as a singer. As a musical theatre geek, I believe that the way I sing and perform has a lot of musical theatre influence!

After my Julie Andrews obsession– as a teenager, I grew up heavily inspired by Christina Aguilera, Kelly Clarkson and Mariah Carey aka the powerhouse women vocalists of the generation. I grew up singing their songs and practiced my high notes and runs with their ballads and hits. And even now, my current favorite singers are all powerful diva singers of this generation: Jessie J and Ariana Grande. I don’t know if I like them because I want to be a powerful diva singer myself, or if I want to be a powerful diva singer because of them….But all I know is that I get goosebumps whenever I see their performances and every time I’m on stage, I want to give the same goosebumps to my audience.

Other artists that I love to listen to in my free time are singers from the 1950’s-1960’s, such as Ella Fitzgerald, The Chordettes, Frank Sinatra, The Beach Boys, Connie Francis and other singers from that era of music. 1950’s American pop is my absolute favorite genre of music and if this kind of music was, “marketable,” I would probably only release albums with this genre of music.

2. What’s your story with music?

Growing up, I always had this unspoken certainty that being is a singer was what I had to do. There was no doubt about it. I loved singing so much. I loved performing. I loved dancing. I loved music. However, that was before I had to actually think like an adult: How was I going to get started? How do I get there? How was I going to make money? It wasn’t until my junior year of high school, when I started to apply to colleges, that I realized that my dream of becoming a singer was actually, “childish” and nearly impossible.

One day, my dad came into my room and asked me, “Kate, what do you want to be when you grow up?” And without thinking, I immediately responded, “A singer, duh!” And very kindly and lovingly, he replied, “Let’s think realistically. What do you want to do– that is realistic– to support yourself financially as an adult and something you find joy in doing?”

But one day, after I graduated high school and was preparing to go to UC Davis as a communications major, my friend who was in Korea to pursue music, contacted me. He told me that he showed some of my singing materials to a Korean entertainment company and that they were interested in meeting me. The timing of this was funny, however, because this was exactly the morning after I prayed to God telling him that even though I really want to be a singer, I will give up my dream if it’s a selfish dream, and not a dream lived out to better the world. I prayed that I’ll become whatever God wants me to be, even if it means doing something I am not interested in. “What is my purpose here on earth? I’ll do and be anything, God! Just make sure that You’re doing it with me from beginning to the end.”

It was as if God was waiting for me to surrender my dream, so that He can give it back to me and I would receive it as a gift…And it worked! I took this opportunity as a precious gift and I was so thankful. I asked my parents if I could go to Korea to meet this entertainment company and surprisingly, they said yes.

3. When did you move to Korea and why?

After the surprising approval from my parents to meet the entertainment company in 2011, I flew to Korea with my mom. The company did not guarantee that I will get in. In fact, I met with them for 15 minutes and never heard from them again. However, just coming to Korea to meet them opened up a door to pursue what I’ve always wanted to pursue-music! Even though things didn’t work out with that entertainment company, I was very proactive in taking vocal and dance lessons during my stay in Korea. And through my vocal and dance schools, I was able to find many opportunities to join other companies.

And without even trying, I was somehow on the journey to becoming a singer.

Every day, I would think to myself, How did I get here? Is this real life? How did this happen? It just seemed too good to be true! I was doing what I’ve wanted to do as a child.
I consider myself blessed to be able to pursue what I love to do. I know that not everybody gets to do that. 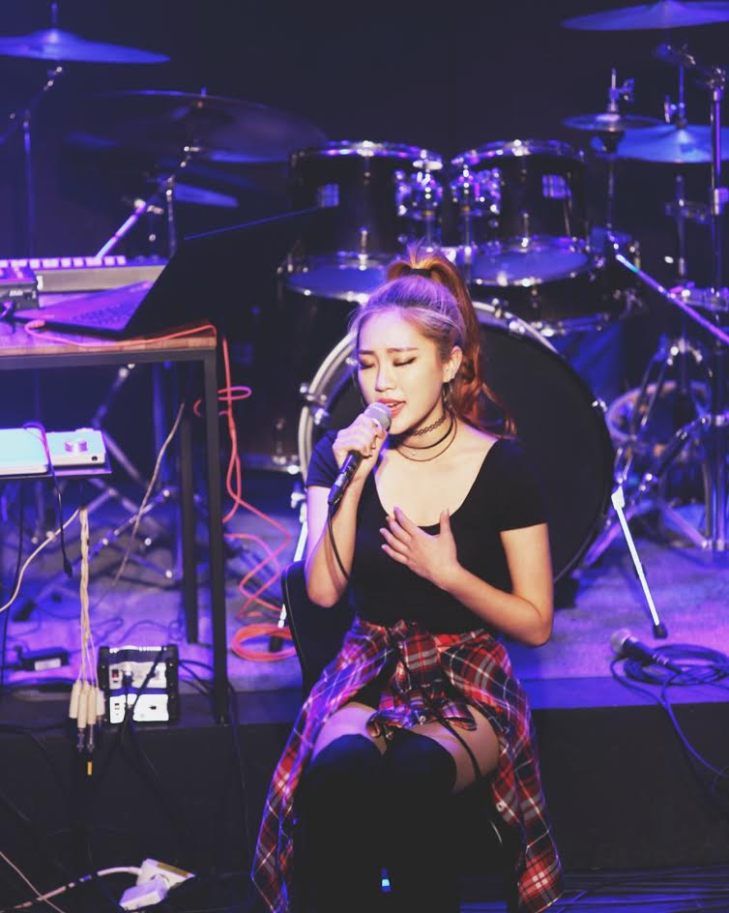 4. Where was your most memorable performance and why?

I’ve had so many memorable performances, each with a different impact on me, a different memory. However, one that really stands out to me and transformed me was performing in the first official Korean cast of Disney’s, High School Musical on stage. It was an experience that stretched me and helped me grow a lot as a musician and performer. I got to perform alongside professional musical singers as well as K-Pop idols.

I was the youngest member of the cast and therefore, learned a lot about Korea’s culture of seniority. It was definitely difficult for me because it was my first time doing a real professional big-stage musical but on top of that, it was also my first time participating in something with people all from a different culture than what I grew up with. But it was such a fun and amazing experience being a part of a crew that was so passionate about what they do.

I remember crying during my rehearsals, because I was so overwhelmed with emotions from 1) listening to how amazing we sounded and 2) how every single person was so passionate and gave their 110%. The whole rehearsal room echoed with passion (and good singing) that I got goosebumps everyday. I definitely learned to always give my 110% for every rehearsal because with rehearsals this good, the performances were bound to be even better. Our 110% rehearsal efforts became 150% on stage and I’m sure our passion was visible to the audience.

5. Which Youtube star or independent artist would you love to do a Youtube cover with and why? Which song would you sing together?

I know most of you might expect me to choose a Youtube singer, not a comedian, but my first choice would definitely be nigahiga aka Ryan Higa. If you are a fan of Ryan Higa and RHPC (The Ryan Higa Production Company), then you know that Ryan Higa releases music videos here and there, mostly comedic but undoubtedly genius.

The K-Pop boy band he and a few other popular Youtube/TV personalities created, BGA (Boys Generally Asian), released, “Dong Saya Dae” and “Who’s It Gonna Be,” both of which reached #1 on the iTunes K-Pop charts. I think his videos are so intricately thought out and pretty genius. I’m a fan. I would love to be a part of one of his comedic songs one day. It’s my dream. I’ve loyally been a fan of Ryan Higa since high school and still watch every single one of his videos now. 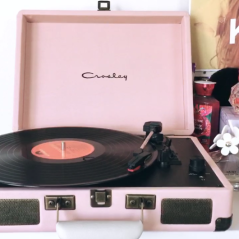 Processed with VSCO with f2 preset

Processed with VSCO with f2 preset

1.I love collecting oldie records and listening to them. The crackle sound of a record spinning makes me so happy 🙂 I can’t wait to buy an amazing record player with an amazing sound system one day and listen to oldies forever and ever.

2.I don’t own a dog and have never owned a dog…. BUT I love dogs so much. To the point of obsession. I love them.

Share about a person who’s influenced you in music.

My dad! He didn’t major in music or pursue it as a career (though he’s had offers from entertainment companies) because his family was very traditional and conservative; all his brothers went to Seoul National University and went into the business field. He was very smart; he was top in his class! Though he never pursued music, he was always interested in it.

The reason I grew up listening to so much good music was because my dad loved it. His hobby was collecting records and investing in the best sound systems, record players, Laserdisc players and everything involved in a home studio. He always played different genres of music and movies in the best quality for me and my sister, and we still have home videos of us loving the music and dancing to it! Even when I was in high school, I would come home from school and hear the sound of my dad playing the guitar. Even now, every time I hear, “House of the Rising Sun,” by The Animals, I can’t help but think of him. Now I know where I acquired my hobby of collecting and listening to records and my desire to one day have a nice home studio system… from my dad!

His interest in music is probably why he is able to give me so much wisdom and advice in every aspect of my music career. He has seen music evolve from the 60’s until now. He has a pretty good ear for what’s trendy and what’s not. He gives me ideas for what to write about in my next song. For every performance I have, he makes sure to research everything about the performance– where it is, who the audience is, what color the stage is– and helps me choose my song list, outfit and other things to match that performance. He is truly the best supporter and help that a singer can have in the industry. He is amazing and I love him!

If you enjoyed reading KATE’s story, check out my CAFE CANVAS corner here!

You can follow updates for My Music Canvas at:

To read more about the MMC platform, refer to the About section on top.